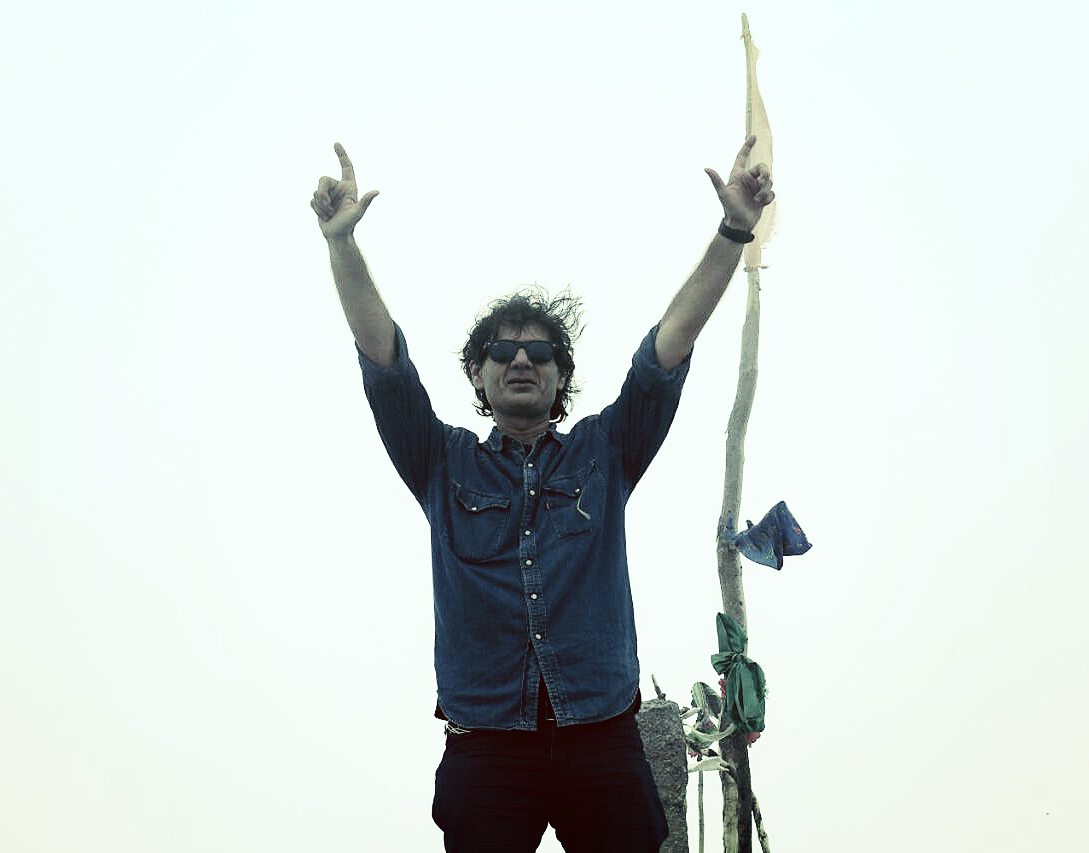 “Great things are done when men and mountains meet; This is not done by jostling in the street.”

After the Eid ul Fitr in last days of June 2017, an adventure trekking group was going to Musa Ka Musalla and I planned with my colleague to go and try to reach summit that we had been planning for the previous two years, since we did Makra Mountain summit, another nearby mountain accessible via Shogran and Paye meadows. That trekking story is for another blog post though.

Musa Ka Musala (MKM) mountain is 4080 meters high at the junction of Seran and Kaghan Valleys. The name translates to “Moses’ Mat” which has different stories associated with it. it is believed to be named after a local shepherd with the name of Musa who used to pray at top of mountain, At the top, there is a Shrine made of stones and flags. There is another grave called ‘pehli ziarart’ or ‘First Shrine’ some 600 meters before the actual summit which is more like a plateau than a usual summit.

Musa ka Musala peak can be attempted using many routes. There are three following routes to that can be used to reach MKM summit:

We were going via first, conventional and most used route from Shinkiari to Munda Gucha hamlet. The other routes are said to be tougher and not as much populated as Munda Gucha route due to logistics and porters availability.

To reach Munda Gucha, reach Shinkiari in Manshera, KPK, and from there further head to Munda Gucha hamlet.

Our trekking group already had arranged the logistics, food, tents, they just needed porters and guide that they got from the Manda Gucha. We had breakfast at Munda Gucha village at 10am and then arranged our own porter with horse to carry our bags. It is 7 hours steep trekking to the basecamp in Gali and having done Makra Summit, Fairy Meadows trek and Nanga Parbat basecamp trek, I had a clear idea what it would feel like after couple of hours with heavy backpacks. I recommended another group members who were planning to carry their own bags & thought they could do it, that it is a tough trekking and you will not be able to do it which they later thanked me for warning them after just first hour of trek.

After breakfast and buying some supplies, we hired the jeeps for the first leg from Manda Gucha to Jachha where our journey actually began. My video starts from Jachha shot and the little stream there. 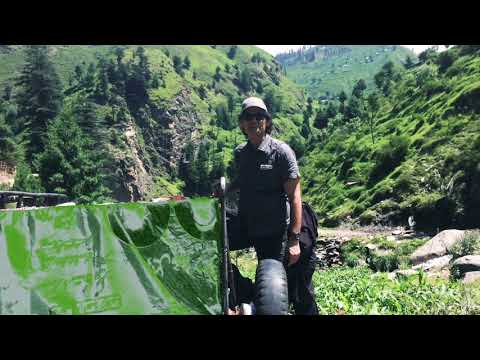 Departure from Lahore to Islamabad and then Mansehra, Shinkiyari and then to Manda Gucha.

We left Lahore at 12 am and reached Islamabad, picked few members from there and reached Manda Gucha at 9am. The melted road ends here in the bazaar. There are small restaurants.

Jachha to Dhor Campsite is about 2 hours trekking and about 5 kms away. There is a wooden bridge at Dhor. We rested at this place due to heavy rain.

From Jachha, uphill begins immediately and first 45 minutes are really tough, Jachha is at 1823 meters elevation.

Dhor is a bigger village, and just after the village that you will be able to see on your left along the river, you will reach the Dhor camp site, which is a little flat land, and a bridge that you can’t miss. Its a good place to rest for a while.

Dhor Bridge is at 1989 meters elevation. From here you have two routes to Jabbar Meadow. You can either cross the big stream, and climb up the steep mountain, which will be a 4.6 Kilometer trek. In this case you will NOT be crossing the Dhor bridge.

We took the second route that seems to be a bit longer but is actually 4.5 kilometers. This path has tough elevation, but easier than the first route that goes straight uphill. You get on this path by crossing the Dhor bridge. While on this path, you will move through a small village called “Nabi”. You will mostly move through dense shrubs and trees and will reach a village called Bakki.

Jabbad is a small and nice meadow. Definitely a place to take a break and some photos. Elevation is 2683 meters.

Jabbad to Khori is a nice scenic trek of 2.1 kilometers. You get a mesmerizing view of Khanda Peak ( also known as Khanda K2 ) on your left almost all the time. Your pass through small meadows and grass fields and finally reach the beautiful Khori village / Khori Meadow at 2935 meters above sea level.

We left at 8 in the morning for the summit, after the breakfast, and head towards Gali. It is a quite steep slope. It was not covered with ice in July. You will need ice axe to navigate through this patch if you go other than the summer months. When we went at end of June, it was too hot, humid and trekking was too hard. you need to carry water because it is not available anywhere so it is an issue in summers when you would be drinking water a lot.

Gali is the saddle of the mountain and the summit push starts from here. Gali is at 3175 meters above sea level.

From here onwards you will be able to see the Thandi Gali Ridge on your right all the time, upto the summit.

From Gali, while moving up, you will obviously first bump into the Pehli Ziyarat, which is a good place to take a longer rest and photos. The elevation of Pehli Ziyarat is 3935 meters.

From Pehli Ziyarat starts the final push to the summit against a steep slope, and it was snow covered even on July 1st. In winters and until June, it is completely snow packed. Reaching the summit opens up an awe striking view of the neighbouring snow covered mountains. You can see the Makra Peak in the distance that we had climbed previous year. I summitted on July 1st, 2017.

made to the #summit of #Musa ka Musala. #MKM (4080 m) 😎
"It is not the mountain we conquer but ourselves." #adventure #trekking pic.twitter.com/2ka9cHXSP6

From the summit till Khori camp site, it took us approximately 4 hours, all downhill. that is where we had camped and were going to stay again at the Khori meadow for the night.

Khori Meadow to Manda Gucha takes 4 to 5 Hours on foot, all downhill.

We got up at 7, packed up the camps, our porters loaded the donkeys and after the breakfast, we immediately left the Khori meadow. We used the route 1 joining Bakki to Dhor, which was quicker to descent. After two days of continuous steep climbing and descent from the summit, my knees and leg muscles were in very bad shape. We had gone on this trekking right after Ramzan and due to whole month gym off time & fasting weakness, body was not ready for this intense climbing all 2 days and descent on third.

Make no mistake about it, and regardless of what you hear from your group leader or read online, It is quite tough trekking and steep hiking for hours and in summer months like June & July, it is hot and humid, and you can’t reach the summit until you are really fit and regular at gym. It was tougher for us, because our adventure group had planned it to complete it within 3 days. The day we arrived in Munda Gucha, We were tired and exhausted after all night travel when we reached Munda Gucha, we had to trek all day all uphill for 7 hours to reach Khori meadows to our base campsite, in rain and hot, humid conditions under scorching sun. With an additional 4th day, it will become easier and doable but you still have to be fit to attempt it.

My advice would be, do not go in summer months, rather go in May or Sep. Winter months would be too tough to make to the summit which is covered in snow even in June & July.

From Jachha, we took the Jeeps back to Manga Gucha as you can watch in the end clip of my instagram video. We had lunch there, cleared out porters, thanked them for their help and headed Lahore in chartered flying coach.

Recent Posts
Categories
Archives
Go to Top
We use cookies on our website to give you the most relevant experience by remembering your preferences and repeat visits. By clicking “Accept”, you consent to the use of ALL the cookies.
Do not sell my personal information.
Cookie SettingsAccept
Manage consent

This website uses cookies to improve your experience while you navigate through the website. Out of these, the cookies that are categorized as necessary are stored on your browser as they are essential for the working of basic functionalities of the website. We also use third-party cookies that help us analyze and understand how you use this website. These cookies will be stored in your browser only with your consent. You also have the option to opt-out of these cookies. But opting out of some of these cookies may affect your browsing experience.
Necessary Always Enabled
Necessary cookies are absolutely essential for the website to function properly. These cookies ensure basic functionalities and security features of the website, anonymously.
Functional
Functional cookies help to perform certain functionalities like sharing the content of the website on social media platforms, collect feedbacks, and other third-party features.
Performance
Performance cookies are used to understand and analyze the key performance indexes of the website which helps in delivering a better user experience for the visitors.
Analytics
Analytical cookies are used to understand how visitors interact with the website. These cookies help provide information on metrics the number of visitors, bounce rate, traffic source, etc.
Advertisement
Advertisement cookies are used to provide visitors with relevant ads and marketing campaigns. These cookies track visitors across websites and collect information to provide customized ads.
Others
Other uncategorized cookies are those that are being analyzed and have not been classified into a category as yet.
SAVE & ACCEPT